‘Mandrake’ is screening as part of Night Visions International Film Festival: the biggest and the oldest festival in Finland to focus on fantasy, horror, science fiction and action cinema. Lynne will be in attendance for two Q&As. 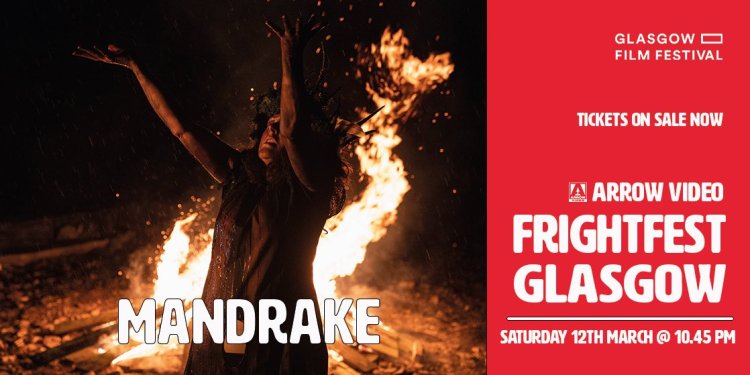 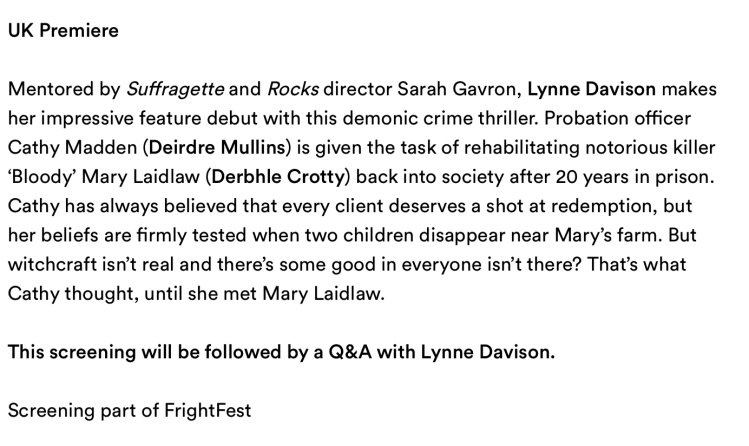 ‘A special screening of Village Films “Mandrake” took place at the Odeon in Victoria Square, attended by cast and crew and lovers of the horror genre. A wonderfully dark and murky story about probation officer, Cathy Madden (Deirdre Mullins) who is tasked with rehabilitating a notorious and terrifying killer ‘Bloody’ Mary Laidlaw (Derbhle Crotty) back into society following a two-decade sentence. Stand out performances and cinematography. This is one not to be missed!’

‘The theme of this year’s festival is Bringing It All Back Home and in addition to Belfast, the line-up of movies includes east Belfast filmmaker Stacey Gregg’s psychological thriller starring Andrea Riseborough, Here Before and a special screening of the gripping occult tale Mandrake, directed by Lisburn-born Lynne Davison.’  Belfast Telegraph

The first episode of Hope Street will be broadcast on BBC One Northern Ireland at 7 pm on Wednesday, November 24.

While shadowing series director Sean Glynn, I had the opportunity to direct a selection of scenes and self-shoot establishing shots on Hope Street.

Post Producton by Yellowmoon, one of Ireland’s leading post houses and the Belfast home to shows like Game of Thrones, Line of Duty and Derry Girls.

A teenage girl, Cara and her ‘Martian’ friend Martin, present a series of Youtube vlogger style videos on Sound and Music…. With varying degrees of success. 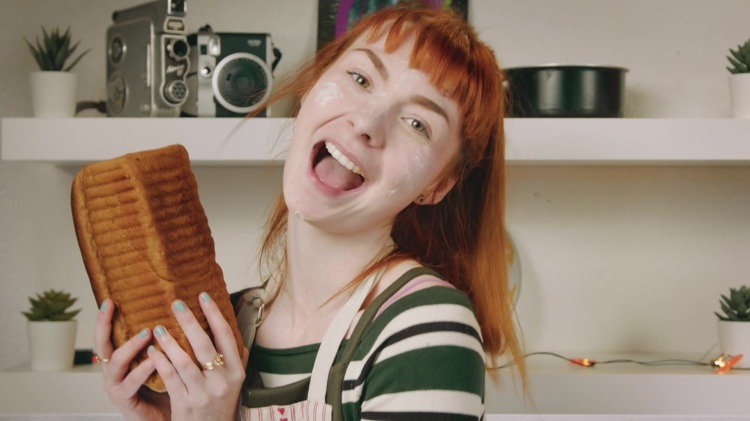 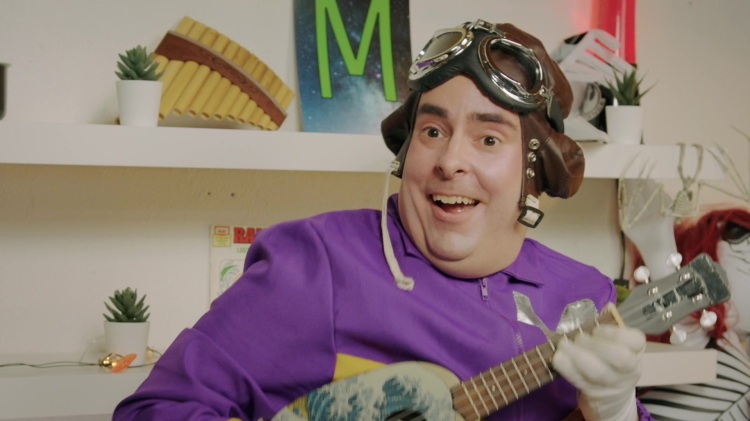 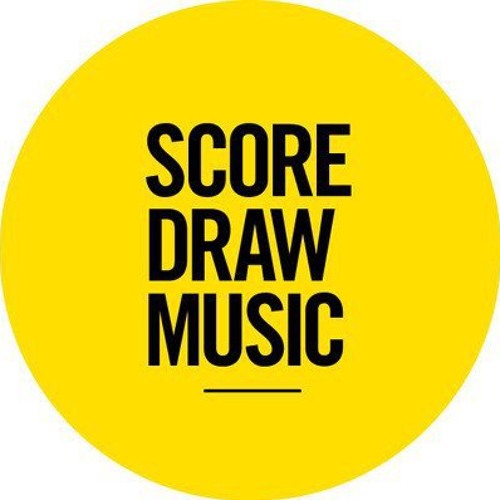 Just before lockdown hit the UK and Ireland I was successful in my bid to direct a BBC Bitesize series on Sound and Music, produced by Scoredraw Music. From a two day shoot and a dedicated post production team working remotely we have delivered an incredible, fun, informative series with a dynamic duo! 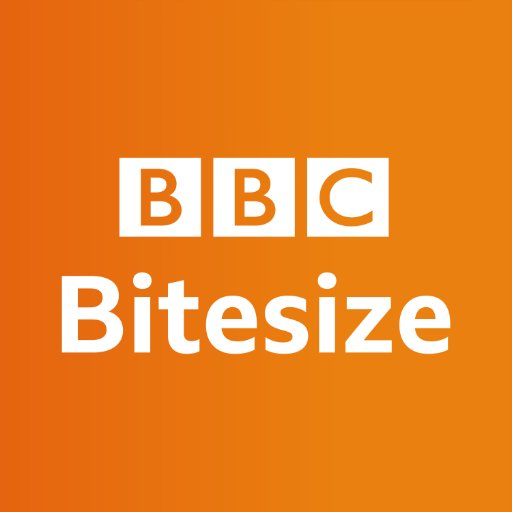 In the midst of a global pandemic parents everywhere have been tasked with homeschooling mixed with childcare while also working and maintaining everyone’s health. Thankfully BBC Bitesize has been paramount in delivering content to support those in need of lesson plans and entertaining delivery of all school topics.

‘When your mum drinks, you grow up fast. Young carer Ryan is getting a grilling from social services after his little sister lands back in A&E for the third time. His explanation: Emma thinks she can fly. Is Ryan covering up something else, or is he just trying to give Emma the childhood that he never got to have? Either way, they both have some growing up to do if they want to stay together as a family.’

BBC Three released ‘The Break’ on iPlayer and Youtube.

I was successful in my bid to direct an episode of BBC Three’s ‘The Break’. Supported by the BBC Writersroom team and BBC Northern Ireland, I had the pleasure of working with the incredibly talented, award winning writer Jan Carson.

Kate Croft, executive producer Artis Pictures and Steven Canny, executive producer BBC Studios said: “Lending our full support to nurturing the next generation of original voices, who have something to say about the world we live in, is an inspiring and vital part of our business. The BBC Writersroom performs a really important function and this year’s films showcase Northern Ireland talent, and we hope will be transformative for the great team bringing them to life.”  Full Media Centre Article.

During my time as Sarah Gavron’s mentee I was invited into post production on her latest feature film ‘Rocks’ which has since premeried at the Toronto international film festival. This time with Sarah and the ‘Rocks’ team was invaluable. 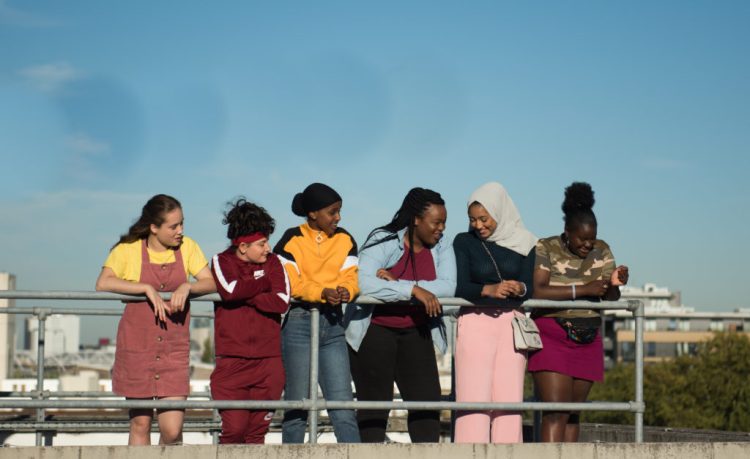 The Climb featured as part of the Northern Exposure short film showcase at BaseCamp Middlesborough.

‘Curation duties are being taken care of by our BFI NETWORK Talent Executive Amy O’Hara, who has picked an array of shorts from filmmakers in the North that spans animation, documentary and live action.’

‘In an intensely competitive process, just twenty women have been selected from hundreds of applicants for this mid-career scheme and they have come from every conceivable area of the industry from OB multi-camera operating to directing, producing, script editing and comedy writing. Each WFTV candidate is paired with a highly experienced mentor and will undergo  six months of comprehensive training.’

Designed to remove barriers and increase opportunities for under-represented filmmakers, Widening the Lens 2019 will be delivered across three days in Bristol and will consist of masterclasses, round table discussions, workshops and film screenings.

Completion of one day practical Directing Your Behaviour workshop in Leeds. The workshop is designed to help directors lead by example when it comes to behaviour in a leadership role while acknowledging that directors can be victims, witnesses and perpetrators of inappropriate behaviour.

Currently supported by the Film and Television Charity’s Going Places fund. The fund aims to support experienced screen industry professionals from anywhere in the UK.

2nd Unit Director on Renegade Pictures’ Doing Money: Directed by Lynsey Miller, Written by Gwyneth Hughes, Produced by Alex Cooke & Mike Dormer. Based on the true story of a Romanian woman who was abducted from her home in London and brought to Northern Ireland where she was sold into Sex Slavery. 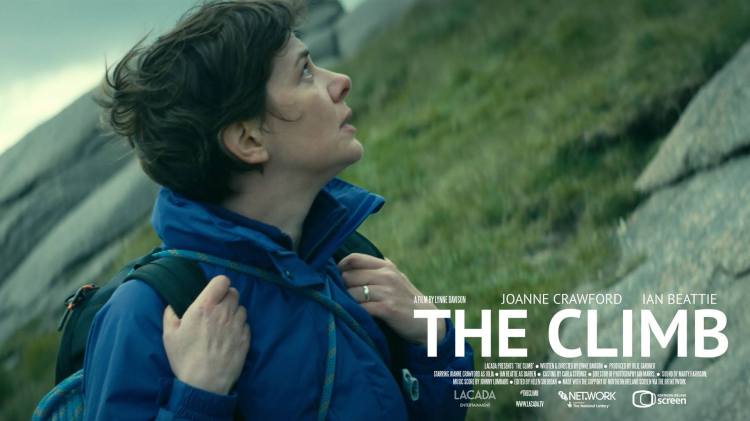 ‘Recently widowed Julia pushes herself to climb a mountain for the first and only time.’

Audience FEEDBACK for The Climb 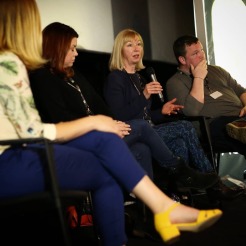 In 2017 I taught the Directing Masterclass for the BFI Academy in Belfast.

Completion of one day course Coaching Skills for Supervisors and Managers in Belfast. Includes deliberate and specific activities designed for employees to develop their skills by learning on the job. The Manager who can develop their coaching skills can lead highly productive teams with motivated individuals, resulting in significantly increasing cost effectiveness and organisational performance.

Connect with a stranger

An elderly woman sits in a park. A young photographer. Sam offers her time, showing Elaine much needed compassion and solidarity.

Between 2009 and 2011 I worked with the Prison Arts Foundation in Northern Ireland, producing, shooting and editing documentaries while also teaching prisoners.